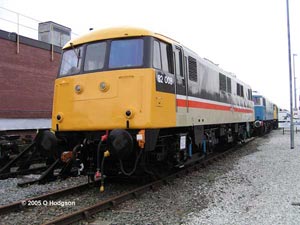 The Metropolitan Vickers division of AEI received the second order of new AC electric locomotives for the West Coast Main Line electrification, and the result was this class of ten type AL2 locomotives. With mechanical construction subcontracted to Beyer-Peacock Ltd, Gorton, Manchester, the first loco to be delivered was E3046 which entered traffic at Longsight on 16 July 1960. Built with separate underframe and body, rather than the integral or semi-integral construction of the other types, these were the heaviest, but also nominally the most powerful of the five designs. They shared a good deal of equipment with type AL1, not surprising as both shared the same parent company (AEI). The last locomotive, E3055, was delivered in April 1962. This loco had a short, if not interesting, career. As built, it was the only one of the initial 100 locomotives not to carry two Stone-Faiveley pantographs, instead carrying one Faiveley and one AEI "cross-arm" pantograph as a trial (this type was later used on Class 87 and some Class 86). It was written off by fire in 1969 after sparks ignited the oil lubrication of the brake system and was stored for some time pending possible conversion to a prototype Thyristor / Silicon Recifier test loco in association with AEI. The other AL2 to be written off before renumbering to the TOPS system was class pioneer, E3046, which suffered a Traction Motor power control failure, believed to be the cause of a fire which gutted the rest of the loco.

During refurbishment in the early 1970s, the appearance of the Class was altered, with a revised louvre arrangement on the equipment side, necessitated by the replacement of the Mercury-Arc rectifiers with a Silicon semi-conductor type. Later physical alterations were confined to the plating over of the headcode panel and fitting of marker lights.

The class was allocated to Longsight (9A, later LG) from new until its mass-withdrawal in 1983, except for a period allocated to the general AC Lines code. Despite being the most powerful of the five types, and despite a reputation amongst drivers of having the best ride quality of the early ACs, the fact that the class was only eight strong meant that by 1983 it was non-standard, and was withdrawn together with the thirteen remaining Class 83s. A short time later, two were reinstated (nos. 82005 and 82008) and moved to Willesden depot for empty carriage (e.c.s.) duties at London Euston station. A third (82003) was retained for spare parts, while the other five made last journeys to Vic Berry's scrapyard. The e.c.s. locos had their maximum speed reduced to 40 mph, and remained at Willesden until 1987 when they were withdrawn for the last time.

The three survivors were returned north to Crewe where they became some of the first members of Crewe Electric Depot's "graveyard" of AC electrics. They remained there until 1993, when 82008 was purchased by Pete Waterman, the other two going for scrap at Booths, Rotherham.