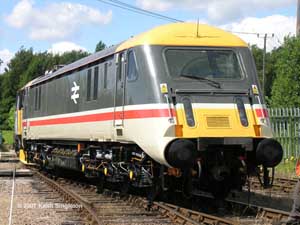 89001 was named "Avocet" on 16th September 1989, with the plates removed again by July 1992 when the loco was put up for sale. Bought privately by a team of Brush engineers, it passed through the ownership of a bus company before being sold to GNER who overhauled the loco and returned it to traffic in 2000. It was again stored in 2003, and moved to Barrow Hill into the group's care at the end of 2004.

Following attention from the group, the loco was passed fit to move by rail and travelled to Crewe Works and Norwich for events in 2005. Put up for sale by GNER in October 2006, our "89 Appeal" resulted in the purchase of the loco by the end of the year.

It was repainted into original InterCity Executive livery in early 2007, and is currently being electrically restored.

In the early 1980s the long-delayed electrification of the East Coast Main Line (ECML) was put back on the agenda. The original rolling stock plan was for locomotive-hauled trains formed of new locomotives and a new build of Mk3 coaches. In response to the plan, Brush designed a completely new electric locomotive and built a "production prototype" (the mechanical construction was sub-contracted to BREL Crewe) which became the one and only Class 89, 89001.

This loco appeared in 1986 and bore no resemblance to its predecessors. It had two streamlined cabs similar to the HST, a Co-Co wheel arrangement (as opposed to the Bo-Bo of all previous AC designs), and a 125mph top speed. The body was profiled to match the Mk3 carriage design and it was fitted with buckeye couplers and rubbing plates (another first for an AC electric). Brush envisaged a fleet of 89s for the ECML, but the loco was also capable of handling heavy freight services, so could theoretically provide modern traction for passenger and freight on the West Coast route too. The opportunity to standardise and modernise the fleets on Britain's two main north-south arteries was there for the taking.

Sadly, before fleet production could get underway (and indeed before the prototype even took to the rails) British Rail's policy towards the new ECML stock had changed in favour of fixed-formation trainsets, with a Class 91 Bo-Bo locomotive semi-permanently attached at one end of a rake of Mk4 coaches; and a new top speed of 140mph. This effectively ruled out the 89, which could only reach 125mph.

A production fleet never materialised, but the design paved the way for Brush to build the Eurotunnel Class 9s and the International Class 92s several years later. Ironically, the Class 91s that were built for the ECML have never been allowed to run above 125mph in regular service after all.

Rolled out in 1986, 89001 was tested on the Old Dalby Test Track before moving to the northern WCML. After a number of very successful test runs, often hauling BREL's "International" rake, the loco moved to Bounds Green on the ECML in 1987 for crew training. In 1988 it travelled to Hamburg to take part in the International Railway Exhibition along with a brand new Class 90 and 91. On its return it was placed into service on relief and commuter services alongside the first Class 91s. Its one-off nature meant that maintenance and spares would always be an issue and by the end of 1990 the combination of a number of minor faults saw the loco taken out of traffic.

In 1992 BR sold the loco to a group of engineers from Brush who saw the potential the loco still offered, and who considered it too good to scrap. They moved it to the Midland Railway Centre at Butterley and into semi-preservation. In early 1996 the loco was moved to Brush Loughborough where staff, working in their own time, endeavoured to get the loco suitable for main line use once again.

Following privatisation the new operators of the ECML, Great North Eastern Railway, required additional traction to cover for poor Class 91 availability and service expansion. The existence of a nearly-new 125mph electric locomotive in private ownership was not overlooked, and 89001 was consequently bought in late 1996. After training, the loco returned to traffic in 1997. Further problems were experienced and the loco was returned to Brush for nearly a year before re-entering traffic in late 1999. Sadly, after only a short time the loco again came out of traffic following further technical problems, returning to traffic briefly in 2000 before being stored at Doncaster.

It was used for a short time as a static carriage power supply at Bounds Green during 2002, but then returned to Doncaster for continued storage. Rolled out briefly in 2003 for the Doncaster 150 open days, the loco remained in store at Doncaster until the site was cleared for redevelopment in late 2004. Following an approach from GNER, the AC Locomotive Group offered storage at Barrow Hill and the loco was moved by road on the 17th December 2004.

In October 2006 GNER put 89001 up for sale, and following a hugely successful appeal, the group was able to purchase the loco in December 2006. 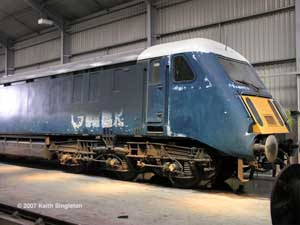 The loco is mostly complete although a number of major components require expensive overhaul before the loco could run on the main line again. A thorough survey has been undertaken to establish exactly what is required, and costs drawn up.

Electrical restoration work has focussed on repairing and/or refurbishing the items that led to the locomotive being withdrawn from service, namely the traction motors and their associated field converter electronics. The locomotive was lifted by HNRC at Barrow Hill in December 2010 and three traction motors were removed including the one known to be faulty. These are currently (February 2011) being examined at Bowers to allow repair cost estimates to be made. Two of the field converters have been removed, one is faulty and again repair estimates are being sought. Initially it is intended, as funds become available, to allow one power group (i.e. one bogie) to become fully operational.